Home
Discover with us all the protagonists of this European Championship

Discover with us all the protagonists of this European Championship

The women’s competition in Stockholm was a Russian 1-2-3 won by Russian Elizaveta Tuktamysheva ahead of her compatriots Elena Radionova and Anna Pogorilaya.
Edea skaters also had a lot to celebrate with a raft of skaters finishing in the top ten. The best placed were theHelgesson sisters from Sweden, with Joshi overcoming last year’s injuries and achieving the best result of her career while Viktoria also scored a PB.
The Finnish skater Kiira Korpi, returned to competition two years of injury also scored an excellent fourth after the short program. But bad luck struck again as a flu virus prevented her from finishing as strongly.
French skater Mae Berenice Meite achieved sixth and remains the benchmark for jumps in Europe.
The Latvian new comer Angelina Kuchvalska, finished an overall seventh after an outstanding free program which included two double axel and six triple jumps that saw her climb 10 places. Not to be outdone ItalianRoberta Rodeghiero finished eighth in front of the emerging German Nicole Schott, the French skater Laurine Lecavalier and the Slovakian Nicole Rajicova. All of them scored well over 150- points and achieved new PBs
In the dance, victory went to the French pair Gabriella Papadakis / Guillaume Cizeron, who finished ahead of the defending champions, the Italians Anna Cappellini / Luca Lanotte, and the Russians Alexandra Stepanova / Ivan Bukin. The gold medal of Gabriella was a historic moment for Edea, as their skates gain a foothold in the dance pairs world. Her success is even sweeter considering she’s not yet twenty. 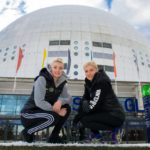 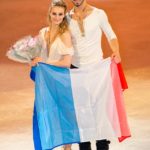 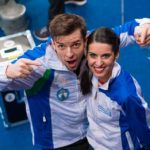 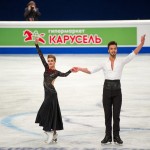 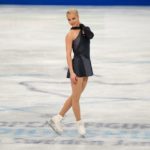 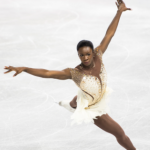 Among the other Edea skaters there were other  great performances, with the Pole Maksim Spodirev, the CzechMichal Ceska and Austrian Juri Kurakin,  all qualifying for short-dance,  and finishing inside the top twenty. Fortune was not so kind for the novice Misato Komatusbara, the victim of an unfortunate fall with his partnerAndrea Fabbri, when they were on their way to a placing among the top twenty.
No shocks in the artistic pairs where the Russians monopolized the podium as predicted.  The only surprise was the victory of the veteran pair Yuko Kavaguti / Alexander Smirnov over the favourites Ksenia Stolbova / Fedor Klimov and new comers Evgenia Tarasova / Vladimir Morozov.
Edea skating pair Valentina Marchei and Ondrej Hotarek in only their fourth event and making their European debut finished an impressive fourth setting a lot of PBs on the way. For the team based in Sesto San Giovanni, it was a debut with a bang, confirming the positive signs from the Italian Nationals which they won by a wide margin.
In the men’s competition, the Spaniard Javier Fernandez took a third consecutive title ahead of the RussiansMaxim Kovtun and Sergei Voronov. One of the major surprises was 16 year-old Israeli Daniel Samohin with two impeccable quadruple toe loops marking him out as one for the future.
Other Edea skaters achieving success included 12th place for the Czech Petr Coufal, whose free program included two double axel and seven triple jumps all executed excellently. 18 year-old Finnish skater Valtter Virtanen achieved a highest placing of his career and a PB. The emerging seventeen year-old Norwegian Sondre Oddvoll Bø, qualified easily for the short program and finished in a creditable twenty-second place.
February 5, 2015