Third event of Grand Prix held the past weekend in Helsinki, Finland, instead of China.

The Olympic Champions in single Yuzuru Hanyu e Alina Zagitova, at their second competition in this season, performed good programs and won the Gold Medals in their categories.

Yuzuru Hanyu set new records under the new score system and he is the first one in the history to jump Quad Toeloop in combo with Triple Axel!

Michal Brezina confirmed the second place he got also at Skate America and could qualify to the Grand Prix Final that will be in Canada in a month.

Another podium sweep in the Ladies with Alina Zagitova in first, Stanislava Konstantinova in second place and Kaori Sakamoto in third.

Here below all the detailed results of Grand Prix di Helsinki. 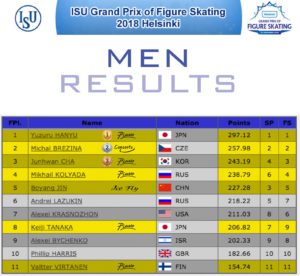 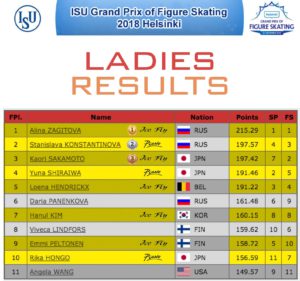 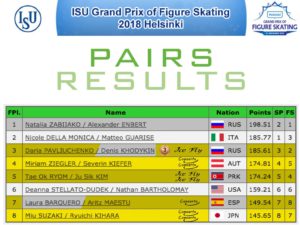